The 1980 Coventry High School wrestling team was not expected by some, to successfully defend Coventry’s two previous State Championship titles. Once again, the Suburban League had the two toughest Division II programs in the state of Ohio and most people in the know thought that 1980 would be Medina Highland’s turn to bring home the hardware. Early in the season, this seemed to be the case as Highland won the prestigious Medina Tournament, while Coventry finished second. But early in February, in a packed (and I do mean packed!) gymnasium at Highland High School, the Comets decided that they didn’t like that second place feeling. In what many still call the most exciting high school athletic event they’ve ever attended, the Coventry Comets up-ended Highland (continuing their undefeated dual meet streak to 7+ years.) in an exciting and unexpected fashion. After that, the Comets could not be stopped. They’d decided that winning another State Title was in order…and they did. Placing for the Comets were 5th place, Keith Harpster, 5th place, Frank Parvin, 3rd place, Ted Roth, 2nd place Rick Klemp and State Champions, John and Mike Potts. The 1980 Comets were coached by Dick Miller and assistants Brian Martin and David Riggs. Manager was Don Houston. Other team members included  Marc Wyatt, Mike Stadvec, Jim Miller, Ken Grut, Jerry Eveleth, Steve Locher, Gregg Miller, Don Bulgrin and Kevin Patrick. 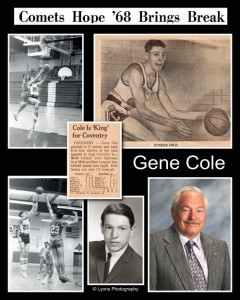 Gene Cole was an outstanding basketball player at Coventry High School from 1965-1968. He was All-Metro 1st team in 1968, All-District and All-State honorable mention in 1968. Gene coached basketball at Coventry from 1990-1992. He was the assistant coach in 1990-1991 for the undefeated girls 7th grade champions. He also assisted coaches Pam Arnold and Leroy Phillips in leading successful Coventry teams. Gene worked for the Coventry Township Maintenance Department for several years beginning in 1968. During the 70’s and 80’s, every spring he would grade the track for the upcoming track season. He took a personal pride in the township parks. He helped build the softball fields behind Turkeyfoot, Lakeview, and Cottage Grove Schools. Gene supervised the building of restrooms at Ingleside and Logan fields and the Play Center. Gene also helped renovate the girls basketball locker room in 1996. Gene joined Portage Lakes Kiwanis in 1976. He served as President in 1985. Gene has served on the scholarship committee and has been Vice President of the Kiwanis Towers. The Coventry Athletic program thanks Gene for his continued support and contribution. We are honored to welcome him to the Coventry High School Hall of Fame. 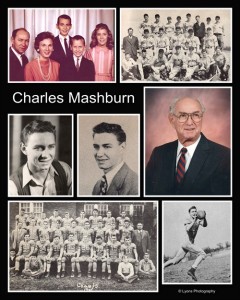 Charlie participated in varsity football for the Comets from 1944-45. He participated in varsity baseball for four years – from 1943-1946. He was a two-year varsity basketball participant in 1944 and 1945. Charlie was All-Metro league in football at split end and defensive end. In 1946, Charlie caught a touchdown pass in the fourth quarter in four consecutive league games, including the championship game at the Rubber Bowl. This preserved the only undefeated and united Coventry Metro champion football team in 1945. Charlie has remained an avid supporter of all Coventry Athletics. He can be seen most any evening at the stadium or gym cheering on a Coventry team. 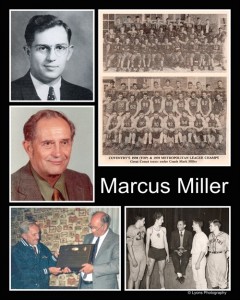 Coach Miller‘s overall football record was 23 wins, 7 losses, 3 ties. He coached for a total of 13 years, and earned 6 championships. He was often recognized as a “Molder of Boys and Maker of Men.” 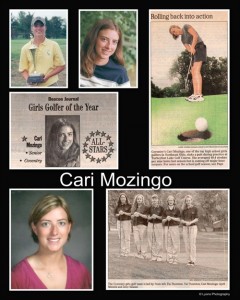 In her freshman year, 1996, Cari lettered in golf and played volleyball and basketball. She was named the Plain Dealer Player of the Week for her performance in the Turkeyfoot Invitational Tournament. Her team advanced that year to the State Tournament, placing 7th out of 12. Cari lettered in golf, volleyball and basketball her sophomore year. She was named as a Beacon Journal “Player to Watch”. Her team placed 4th in the District Tournament. In 1998, Cari’s junior year, she lettered in golf, volleyball and basketball once again. She was named Cleveland Plain Dealer Player of the Week, Plain Dealer All Star team, Akron Beacon Journal All Star team and was the Akron Touchdown Club Player of the Year. As a Comet senior, Cari lettered in golf and basketball. She averaged 38.6 for nine holes in golf and was a medalist in every match. She won two Invitational tournaments and the Sectional tournament. Cari placed 5th as an individual at Districts and the team advanced to the State Tournament. She placed 5th at the State Tournament, earning All-state honors. She was named Beacon Journal player of the year, Touchdown Club player of the year, WAKR Athlete of the Week, and was recognized in Who’s Who of High School Sports. Cari went on to play collegiate golf at Ohio University where she played from 2000 to 2004. She was the team captain from 2003 to 2004 as well as the team MVP. Her junior and senior year, she was selected second team All-MAC conference. Cari also earned academic awards including the National Golf Coaches Association All American Scholar and All MAC Academic Team. Cari has competed at the local, state and national level. In 2002 she qualified and played in the Women’s Amateur Public Links Golf Championship in Bend, Oregon and in 2003 played in the U.S. Women’s Amateur in Philadelphia. Cari has competed in the Ohio Women’s State Amateur since 1999 and advanced to the semi-finals in 2002, 2004 and 2006. Cari is now a teacher in Lake Local Schools. She and her husband, Jeff, live in Coventry.