Kurt played football, basketball, and track during his tenure at Coventry High School. In football, Kurt was a two-year letterman and captain. He holds the distinction of being the first Coventry football player to be First Team All-State as a defensive back following his senior season. Kurt was also a First Team All-Suburban League selection at quarterback. Kurt was a two-year letterman in basketball and earned Honorable Mention All-Suburban League honors. In track, Kurt was a four-year letterman and two-year captain. He set the school low-hurdles record. He was also the Suburban League high and low-hurdle champion and the Northeastern Ohio District high-hurdles champion. As a senior, Kurt was awarded the Ken Eshelman Award given annually to a male student who exemplifies leadership, scholarship and citizenship. He was also awarded the Ron Rector award, which is given to the most outstanding senior football player. After his high school graduation, Kurt went on to the United States Coast Guard Academy where he participated in football, indoor track, and outdoor track. He was a two-year letterman in football, setting four school passing records in one game. He earned four letters in indoor track and was named Most Valuable Track Athlete. Kurt earned an additional two letters in outdoor track. After graduating from the U.S. Coast Guard, he went on to a career in the Coast Guard where he was awarded several medals before retiring in 2006. After the Coast Guard Kurt pursued a Master of Divinity with a specialization in Chaplaincy.

While at Coventry High School, Keith was a three-sport letterman in football, wrestling, and track. He was voted co-captain of the ’78 Comet football squad. He also co-captained the 1978 State Championship Wrestling Team, the first in Coventry school history. As a wrestler, Keith was Coventry’s first three-time finalist at the Ohio High School State Wrestling Championships. He was a two-time undefeated State Champion at 155 pounds during his junior and senior years. As a sophomore, Keith was the state runner-up at 155 pounds. He was also a three-time sectional champion and a two-time Suburban League and Northeastern Ohio District Champion. Keith held an overall record of 84 wins and 8 defeats during his stellar career at Coventry. He received an athletic scholarship to the University of Arizona where he continued his wrestling career. In 1979, at Arizona, Keith was voted to the Amateur Wrestling News, Freshman, All-American Team. He was a two-time NCAA Division I qualifier and a two-time Pacific 10 Conference place winner. In 1981, he was selected as a team captain for the Wildcats. Keith transferred to Michigan State after the 1981 season to continue his wrestling career after Arizona dropped their wrestling program. Keith holds the distinction of being the first wrestler in history to represent both the PAC 10 Conference and the Big 10 Conference at the NCAA Division I Wrestling Championships. In 1982 he was selected to the Amateur Wrestling News Preseason All-American Team. Keith’s career was cut short due to a season ending injury during his senior year. He went on to earn his Bachelor of Arts degree from Michigan State in 1983. He also earned an MBA from Georgia State University. Keith then moved on to become the Vice President of Sales for LiteSteel Technologies America. In 2009, he celebrated his 25th wedding anniversary with his childhood sweetheart Nancy.

While at Coventry High School, Bob was a four-year member of the football and basketball teams. He graduated from Coventry High School in 1961. Bob attended the University of Akron on a football scholarship. He graduated from the University of Akron in 1966. Upon graduation, Bob began his career in education at Field High School. After just one year at Field, Bob came back home to the Coventry Local School District where he served as a teacher, coach and Athletic Director for thirty years. He retired from teaching in 1996 and began working as the Director of the Mogul Mite Program and Ski Instructor at Boston Mills and Brandywine. Bob has four married children and four granddaughters. 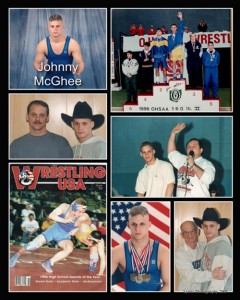 Still known in wrestling circles as the “Incomparable Johnny McGhee” John was a 1996 graduate of Coventry High School, where he was a four-time letterman on the wrestling team. While at Coventry, John was a member of the 1993 and 1996 State Championship Teams and amassed a high school record of 154-3, with 98 of those victories coming by pin. John was a four-time League Champion, four-time Sectional Champion, three-time District Champion and he became Ohio’s eighth four-time State Champion. He is the only wrestler to accomplish this feat at a weight class as high as 135 pounds. He was named Most Outstanding Wrestler for the State of Ohio in 1996. During his high school career, John was named PAC 7 Wrestler of the Year three times, Akron Beacon Journal Wrestler of the Year three times, The Cleveland Plain Dealer Wrestler of the Year twice, and in 1996, John was the 160 lb. High School Senior National Champion and was named Athlete of the Year by the Cleveland Plain Dealer. John continued his wrestling career at Iowa Central, where he was a two time All-American and a Junior College National Champion before his career was cut short by a knee injury. 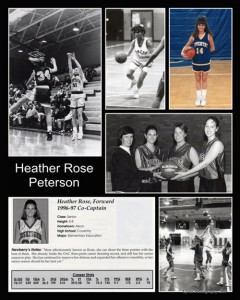 Throughout her four years at Coventry High School, Heather was actively involved in many sports. She was a four-year varsity letter winner in basketball, a three-year varsity letter winner in softball, a varsity football cheerleader for two years and played soccer during her senior year. Heather’s favorite sport, and the one she excelled in the most, was basketball. As a sophomore and junior, Heather was selected to the Honorable Mention PAC 7 Conference team. As a senior, she was selected as team co-captain by her peers, and was selected to the PAC 7 Conference First-Team. Heather was also voted by league coaches as the PAC 7 Player of the Year. During her senior year, Heather established a single season scoring average of 20.2 points per game. She was selected to the All-Summit County 2nd Team, 3rd team All-District, 2nd Team All-Northeastern Ohio, and Honorable Mention All-Ohio. Heather was recognized by the Akron Beacon Journal and the Ohio High School Athletic Association as a top scholar athlete in 1993. She continued her academic and athletic career at Muskingum College. While at Muskingum, she earned four letters in basketball and tennis. She scored over 1,000 points during her career for the Lady Muskies and set a school and Conference record for the most 3-point baskets made with 269 during her career. After graduating in 1997 with a degree in Elementary Education, Heather began her teaching career with Dover City Schools. Since 1998, Heather has been teaching in the Coventry Local School District where she has also served as a softball, tennis, basketball and volleyball coach. Heather and her husband Danny reside in Coventry Township with their two girls, Taylor and Sydney. Heather is proud to be a Comet!

Ted is without question on of the most courageous and determined student-athletes to ever attend Coventry High School. When he was four years old, his leg was crushed by a train. As a result, he was left with one leg. This event did not dampen Ted’s outlook on life. He felt that he could do anything to which he put his mind. While growing up on a farm, Ted would jump barbwire fences to escape the bull that would chase him and his brother Tony. Ted enjoyed many sports as a youngster. He became a very good swimmer and swam the entire lake of North Reservoir. He also wanted to play football. As a sophomore at Coventry High School, he tried out for the team. Coach Art Parde feared that Ted might get hurt or worse injure a fellow player after he knocked a teammate out of practice. Ted enjoyed football because it was a contact sport. It helped him to get rid of the anger that he had built up inside. As a junior one of Ted’s classmates saw him jumping over several high fences and encouraged him to go out for the track team. The first time that Ted high jumped at a track meet, he cleared 5’4” which tied the school record. He continued to improve over the course of his junior and senior campaigns. As a senior, Ted cleared 5’7” which put him in a tie for first place at the Tri-County Meet. That jump stood as a school record at Coventry High School for over 20 years. In 1956, Ted was featured in a national magazine. The article was called “High Heart of a High Jumper.” Ted met his wife Grace at Coventry High School while they were in 8th grade. They have been married for over 50 years and have five children; Ted, Tim, Tami, Tom and Tony and six grandchildren.