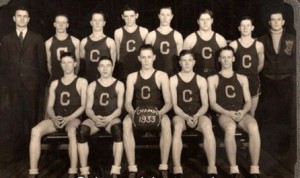 The 1933 Boys Basketball Team was one of the first great teams in any sport in Coventry High School athletic history. The 1933 team was led by Coach William Lachman and Manager Howard Walton. The ’33 team captured the Class B Championship in Summit County and the Class B District and Sectional Championships at Kent. The team advanced all the way to the State Semifinals in Columbus. Team members included: James Anderson, Robert Roderick, William Hyatt, Wilbur Scheible, Carl Hunter, Theodore Steele, Thomas Lies, Thomas Taylor, Leroy Miller, Delbert Walton and Harold Palmer. As of 2010, the sole surviving member of the team is Delbert “Red” Walton who accepted the award on behalf of his coaches and teammates. 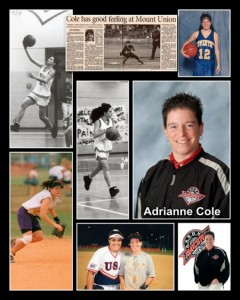 Cole participated in five varsity sports while in high school, earning 10 varsity letters. Adrianne was a 4-year letter winner for the Lady Comets basketball team. She was a co-captain of her basketball team for three seasons. She earned All-District honors three times during her playing career and was an All-State selection after her junior and senior campaigns. Adrianne reached the 1,000 points scored plateau during her junior season, the fastest in school history. She scored over 1,400 points in her career. In softball, Adrianne was a three-time All-Conference selection and served as team captain during her junior and senior years. Adrianne continued her softball career at Mount Union College. She was selected to the All-OAC team four times. She was also the MVP of the Ohio Athletic Conference in 1998 and again in 2000. Adrianne is a three time All-American as well. She still holds 13 individual records at Mount Union. Adrianne graduated from Mount Union in 2001. She later earned a Masters Degree at Kent State University. She worked in the Athletic Department at Kent State for three years as an Athletic Trainer. She currently works for Akron General Wellness Center and also serves as the Head Trainer for the Akron Racers Professional Softball team. 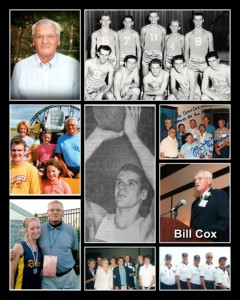 Cox attended Coventry High School from 1955-58, earning 10 varsity letters. While he excelled in track and field, football, and golf, Bill is arguably one of the best basketball players to have graduated from Coventry High School. During his senior season, Bill led his team in scoring in every game. He was also the team’s leading rebounder and captain. Bill received several post-season honors and awards following his outstanding senior season. He was selected to the All-Metro League first team, All-District first team and All-State team. Bill still holds several school records. His 24.8 points per game average is still the best in school history. Bill received 13 scholarship offers to play basketball at the collegiate level. Bill accepted a scholarship to Bowling Green State University where he continued his playing career. He received a Bachelor of Science degree from Bowling Green in 1963 and a Master of Education degree in 1966 from BGSU as well. Bill was an educator for 37½ years. In addition to his classroom duties, Bill also coached several varsity sports on the high school level. Bill is a past president of the Portage County Basketball Officials Association and the Ohio Track and Field and Cross Country Officials. He then served as the assignor for the Portage Trails Conference track officials.

Eckard was the 1959 Beacon Journal Co-Football Player of the Year. He was also a 1st team All-District performer for three years. Dave was selected, by unanimous vote, to the All-Metro Team during his senior year. Dave still holds several school records. He tops the list for points in a game, season, and career, as well as the record for rushing touchdowns scored in a season and a career. Dave also participated in track while at Coventry and was a three time sprint champion. He placed 3rd and 4th at the state meet. Dave was recruited heavily by colleges and universities across the nation. Dave accepted an athletic scholarship to The Ohio State University and played for legendary coach Woody Hayes. Dave later attended the Pittsburgh Institute of Mortuary Science. Dave was the owner/operator of Eckard-Baldwin Funeral Home. Dave passed away in September of 2001.

As a wrestler, Glover’s individual record speaks for itself. Randy’s record during his four-year career stands at 106 wins and only 6 defeats. He was a four-time Suburban League champion during his career. Glover is the first four-time state qualifier in school history and also the first two-time state champion in school history. Randy was a member of the 1978 State Championship Team, the first in Coventry High School history. Randy went on to become one of the most successful high school wrestling coaches the State of Ohio has ever produced. He is the first coach in the modern era to win a State Championship at two different high schools (Coventry and St. Vincent-St. Mary). During his coaching tenure, he has coached 37 state qualifiers, 22 state placers, 9 state champions, 1 four-time State Champion and 1 National Champion. Randy was the 2001 Plain Dealer and Summit Country Coach of the Year as well as the 1993 Coach of the Year for the State of Ohio.

While competing on the Comet Football squad, Harrison helped lead the Comets to a 25-5 record which included a 15-12 victory over archrival Manchester, ending their undefeated season. An outstanding two way performer for the Comets, James rushed for over 1,000 yards during his junior and senior seasons. James continued his playing career at Kent State University where, in addition to his exploits on the gridiron, James made the Dean’s List in 2000 with a 3.4 GPA. While at Kent State, James was named the outstanding defensive player after the 2000 and 2001 seasons. He was also an All-MAC selection during his college playing career. After Kent, Harrison went on to become a member of the Pittsburgh Steelers. 2007 was quite impressive an impressive season for James individually. He was selected by his teammates as their Defensive MVP. He was also elected by his peers to represent the AFC in the Pro Bowl game in Honolulu, Hawaii, which as of 2010, he has been to three of. James was also an Associated Press 1st Team All-Pro selection following the 2007 season. In 2008 Harrison recorded 10 total tackles, 2.5 sacks, 2 tackles for a loss and a forced fumble during a Monday Night Football game against the Baltimore Ravens. In 2009 Harrison was named the AP NFL National Defensive Player of the year. He became the first undrafted player to win this award. His year ended with arguably one of the most memorable Super Bowl highlights in recent history; during Super Bowl XLIII, Harrison intercepted a pass from Cardinals quarterback Kurt Warner at the goal line and ran back the length of the field for a 100-yard touchdown at the end of the first half. It was the longest play in Super Bowl history and helped the Steelers defeat the Arizona Cardinals 27-23.

Penny was perhaps the only Comet Athlete to earn All-Conference (Surburban League) Honors four consecutive years in three varsity sports – basketball, softball and volleyball. During her high school basketball career, Haser was a point guard. She helped lead the Lady Comets to the Suburban League Title during her sophomore year. As a senior, Penny averaged 18.8 points per contest. During her career she totaled 1,331 points. Penny earned All-County and All-State honors after her senior season. Penny graduated from Coventry High School in 1980 and was awarded a full basketball scholarship to the University of Akron where she played four years. While at Akron U., Penny was also a member of the softball team. She graduated in 1985 with a Bachelor of Fine Arts. She went on to receive a Master of Education Degree from Kent State in 1995. In 2000, Penny became a Transition Coordinator at Cuyahoga Valley Career Center. Penny serves on the Summit County Softball Hall of Fame Commission. Penny is the only child of Rudy and Betty Haser, lifelong Coventry residents.

Leroy graduated from Coventry High School in 1958. He spent over twenty-seven years coaching boys and girls in Coventry. He was also an employee of the Coventry Local School District for almost thirty years. There may not be another person who has touched the lives of so many Coventry athletes. Leroy was well-respected and loved by everyone. Leroy passed away and his absence is still felt at all Comet contests at all levels. Leroy is one of the most recognizable Comet fans in memory. He loved the Comets and probably bled “Blue and Gold.”

While at Coventry High School, Ron was a member of the varsity basketball, football, and track teams. He was selected as a co-captain of the 1961 Comet football squad. Ron’s exploits on the gridiron landed him a football scholarship to Northwestern University in Evanston, Illinois. Ron was a four-year letter winner at Northwestern. Ron also won the Big Ten punting honors as a senior, with an average of 40.5 yards per punt. After his playing career at Northwestern ended, Ron was chosen to participate in the annual Blue-Gray Classic in Montgomery, Alabama. This game matched the senior all-stars from across the country against one another. He also participated in the Hula Bowl in Honolulu, Hawaii in January 1967. In that game, Ron caught the game winning touchdown. Ron was drafted in the 9th round of the 1966 National Football League Draft by the Green Bay Packers. Ron was one of the last rookies released by the Packers. After a brief stop with the Washington Redskins, Ron was picked up by the Atlanta Falcons. He became a starting running back for the Falcons and finished out the 1967 season with them. The Falcons had high expectations for Ron as their starting halfback for the 1968 season. These hopes were never realized. While motorcycling down I-77 on June 29, 1968, Ron apparently lost control of his motorcycle near the Delaware-Franklin County line. He received a severe head injury from which he died the following day. Ron is remembered annually by the Coventry High School Athletic Department. Each year, an outstanding Coventry student-athlete is presented with the Ron Rector Award.

Dave holds the distinction of being the first wrestler to compete on the mat for Erwine Junior High School at 70 pounds. He is also Coventry High’s first state champion and runner up. Dave holds a career individual record of 63-4. He received an athletic scholarship to the University of Arizona where he continued his wrestling career. While at Arizona, Dave was a four-year varsity wrestler and Team Captain. Dave was a PAC-10 Conference runner-up and competed in the Olympic trials in 1980. After his wrestling career ended, Dave took up coaching. He has been coaching wrestling on the high school level for twenty-eight years, twenty-two of those years as a head coach. Dave’s record is very impressive, to say the least. As a head coach, he has produced eighteen state champions. Dave’s teams have won 214 matches over his career. While at coaching at Massillon Perry High School, Dave has helped to lead the Panthers to thirteen Federal League Titles.

Starkey participated in basketball, football and power-lifting while at Coventry High School. Jeff was an outstanding running back and linebacker for the Comet teams he played on. Jeff was a very hardworking student-athlete who wanted to excel and improve each and every time he stepped onto the football field. Jeff earned three varsity letters in football. He earned several post-season honors as well. He was a member of the All-PAC 7 first team after his junior and senior seasons. He was elected captain of the ’91 Comets by his teammates. During that same season, Jeff was named Team MVP and earned All-Northeast Ohio and All-State honors. Jeff continued his football career at Mount Union College. While at Mount Union, Jeff played defensive end for the Purple Raiders and was a member of one of their early National Championship teams. Jeff received his degree in education and began his teaching career as a history teacher at Jackson Middle School. This job enabled him to coach football on the high school level. From there Jeff coached at St. Henry High School near Dayton, Ohio. He won two State Championships within his first five years as a head coach at the school. Jeff and his wife Melissa are the proud parents of two boys.