The event focused on the values learned from playing football, the fundamentals and career opportunities in the sports business industry and focused on educating and inspiring local high school football players and coaches. Attendees engaged with current NFL players, NFL Legends, coaches, and other leaders in the sport. Moderators lead breakout sessions focusing on character values and Way to Play fundamentals.

Bentley and Sanders also imparted some wisdom on the Comets.

“This game teaches you things you can use off the field. You’ll learn outside of this game, and if you can take those things and use them in other areas of your life, you’re unstoppable, you’ll be successful in ways that people wouldn’t even imagine,” said Sanders. 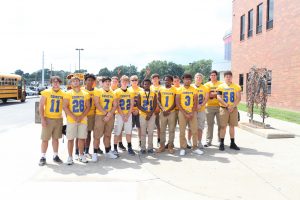