We are the Champions!  Congratulations to our 7th and 8th grade volleyball teams as they both defeated the Norton Panthers to win the PTC tournament championship!

Yesterday’s championship match up was a battle for our 8th grade girls.  It was an intense game against a much improved Panther team.  The game scores were 25-20 and 25-15.  Jordynn Rafferty led the team with 9 service points and Brooke Mirka had 8 points.  Lexi Dimeff led in assists and had 6 service points as well.  Ronnie Meinen led the team in kills and blocks.  Our 8th grade team finishes their middle school volleyball career as undefeated back-to-back League champions!  They finished this season at 22-0 with an overall combined two-year record of 42-0!  A huge shout out to Coach Debbie Gotto and this amazing group of athletes for a phenomenal season!

The 7th grade team also faced a strong Norton group of girls.  Both teams entered the tournament with only one league loss.  Our Comets came out strong in game one winning 25-17.  In game two, the Panthers battled back to win 20-25 and in the deciding game three, the Comets prevailed 25-20.  Madi Burkhart led the team with one amazing block, good hits and 13 service points.  Sydney Peterson led the team in assists and added 10 service points.  Rounding out the scoring was Alexa DeLong with 8 points.  Aubrey McCracken led in kills at the net and Gabby Dick and Emmie Morrison were the top passers.  The 7th grade team finishes their season at 18-1. 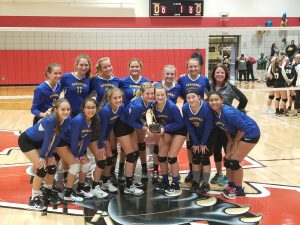 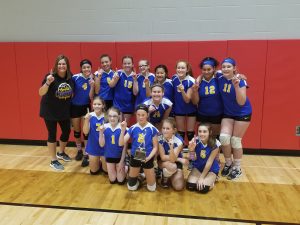 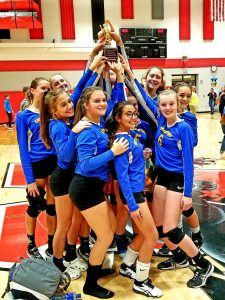 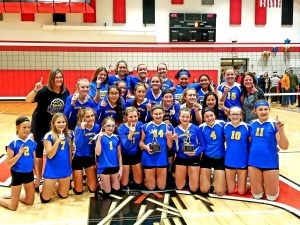 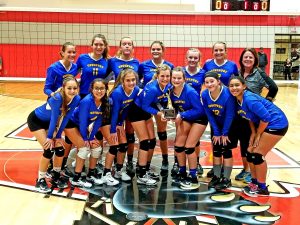