The 8th grade volleyball team began their season playing in the Jackson Early Bird Tournament on Saturday, August 18. They proved that they are a force to be reckoned with! The Comets went 3-0 at the tournament by defeating Tusky Central Catholic, Marlington, and Jackson. The girls worked together and fought hard for each win. Mallory Meinen, Brooke Mirka, Lexi Dimeff, and Emma Gotto led the team in service points. Ronnie Meinen led the team in blocks. Maria Church and Haley Futrell proved they are great back row specialists and had some great digs throughout the day. Jordynn Rafferty and Cailey Hughes also played well at the net and Grace Hall, Joy Prater, and Juli Reza played well in the back row. Coach Gotto was very proud of how the girls came together and played as a team against some very good competition. The girls travel to Streetsboro on Wednesday, August 22 to begin league play. Their first home match is Monday, August 27 against Field.

The 7th grade team won 2 out of the 6 sets they played. 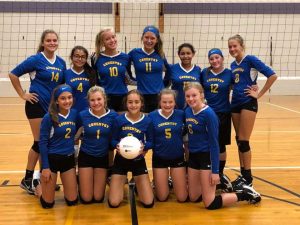